So the size medium Relco short sleeved button down arrived today. As I suspected, the sleeves were pretty much perfect but the shirt was too large around the chest by a few inches.

Unless one of the shirts I received was somehow defective, the difference in size between a small and medium is significant and severe, indeed it almost seems like the small should really be extra-small and that the company lacks a true size small. If Relco could combine the small size’s chest with the medium size’s sleeves, we might have a very well-fitting shirt on our hands. Alas they do not do that as far as I know.

The medium I received has a different label than the two size smalls I purchased previously. Moreover the fabric on the size medium seems to be of slightly better quality than than the trash cotton of which the size smalls are made. This fact suggests a number of possible conclusions. It is possible that one of the sizes is old stock and one is new. It is also possible that they actually come from different lines by Relco, though I’ve found no evidence that such different clothing lines exist. It’s also possible the cheaper ones may be fakes, but it seems quite a niche company to be worth fake.

Either way it would appear that more Relco research is needed. I need to find a Relco small with a label that matches the one in the medium, and vice versa, in order to reach a proper conclusion about Relco shirts.

If any reader out there knows if there’s a difference between older and newer Relco shirts, and why I have two shirts from the same company with two different labels, I’d love to know in the comments section. 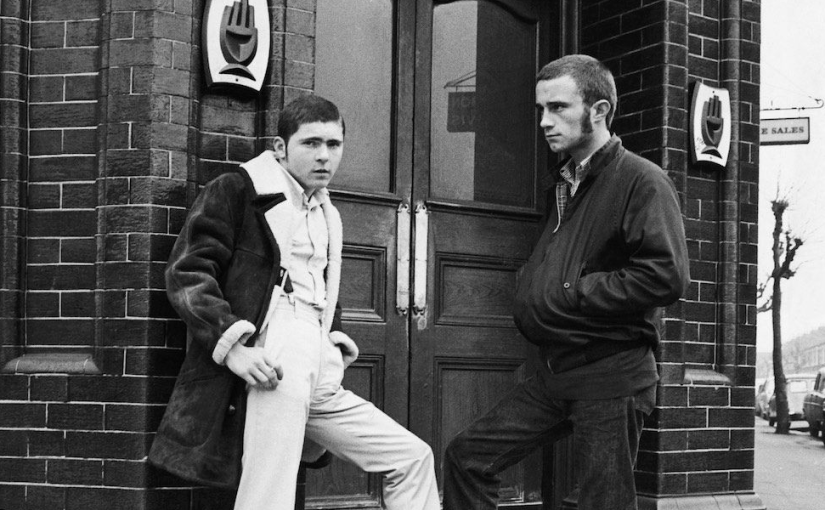 This should have probably been the first post on this blog, but oh well.

First, a little bit about myself. I have been fascinated with the skinhead cult and its style since I was first exposed to it when I was around 12 or 13 years old. When I was a wee lad, that bizarre bastard synthesis of two-tone and pop-punk that became known as “third wave ska” was all the rage in my corner of suburban New Jersey. Thankfully it wasn’t all Reel Big Fish and Less Than Jake — bands like the Slackers, the Toasters, and the Hub City Stompers pointed me in the direction of the roots ‘n’ real stuff. And in a blended scene that saw skater-punk kids, two-tone wannabes, street punks, and what can only be described as proto-emo kids all stewing in the same shows, the skinheads — slightly menacing and smartly dressed — truly stood out. Around the same time I was getting deep into ska and encountering actual skinheads for the first time, my dad was regaling me with tales of skinhead encounters during his youth in England in the late 1960s and early 1970s. I was sold.

You probably noticed that I refer to myself as a suedehead in the ‘About’ section of this site. This is not only because my hair is longer than a #3, but also due to the fact that I have a white collar job and grew up in the suburbs. I’m fiercely proud of my working class roots (my dad comes from a long line of millworkers in Yorkshire), but it would be dishonest to claim that I myself am working class — other than perhaps a few of my political beliefs.

“Working class pride” rhetoric aside, the skinhead cult (the original one, anyway) was, in my oh so humble opinion, always first and foremost about fashion. The — dare I say — fetishization of working class identity didn’t really solidify until the second wave of skinheads and the rise of Oi! in the late ’70s and early ’80s. Anyway, back to fashion.

As you may have guessed, this blog, and my personal style, pay homage to the original skins, suedes, and boot boys of the mid 1960s through the early 1970s. To that end, here are some of the things you will find discussed and celebrated here: the 1960s Ivy League look, mod and skin-associated clothing brands, sta-prest, button-downs, brogues, sheepskins, crombies, ska, rocksteady, reggae, and maybe, just maybe, even the occasional Oi! band. And here are some of things you will absolutely not find celebrated here, and discussed only with derision: boots higher than 11 eyes (and that’s only because I own a pair of 11 eye Solos), bleached anything, skin-tight trousers or jeans, flight jackets, or Jenny Woo.

Anyway, that’s all for now, folks. And remember: stay booted, suited, and sharp!

When it comes to a basic pair of bovvars, I’m somewhat of a Solovair partisan. In terms of style, quality, construction, and pedigree they have it all. But there’s a bevy of beautiful boots out there beyond your bog standard Docs, Solos, and Gripfasts. The following are a few of them. Some are on the traditional side and some are, well, not.

William Lennon & Co. has been making work boots since the 19th century, and there’s as good a chance as any that some of the very first bootboys may have worn the company’s boots. The 78TC work boot is a traditional derby style boot and just one of the WL&C’s “Ruff-lander” range to make this list. Unfortunately quality and tradition doesn’t come cheap. A pair of these costs £153.95, or about $187.

This boot appears to be a slightly heavier-duty and significantly cheaper version of the 78TC. Though certainly less refined than its more expensive cousin, it’s darker leather and lack of a stitched toe cap may be a plus to some. £99.95, or about $121.

The old school beauties are as close as you’re likely to find to the old school capped boots worn by the earliest skinheads in the days before Docs. Yours truly is aching to get himself a pair and lather them up in oxblood polish. £59.95, or around $73.

These interesting specimens are very similar to the exposed-cap miners’ boots reportedly worn by some early skinheads. Would I wear these? No. Would someone wear these? Who knows, but I figured I’d mention them anyway.

This gorgeous boot is as far from traditional skinhead clobber as where it was born. According to the company’s website, the Iron Ranger was designed for coal miners in the American Midwest. Red Wing boots are beautifully made and their quality is second to none. Unfortunately so is the price. $329.99.

Traditional paratrooper-style combat boots like these can be seen in some early images of skins. Not my style personally but these are by far the best I’ve seen. I’m not sure why, but as far as excessive eyelets go these somehow look less ridiculous than similarly-high Docs and Solos. Black: $159.99. Brown: $169.95. 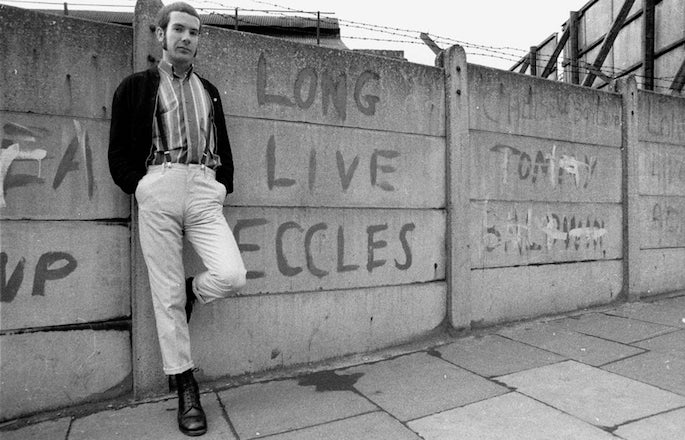 Authentic sta-prests are something of a unicorn in the bootboy world, a white whale of which wishful skinheads dream.

Many a modern retailer that capitalizes on mod and skinhead culture offer versions of “sta-prest” trousers. The Merc, Relco, and Brutus versions are, by all accounts, underwhelming at best. Overly modern and overly slim cuts are apparently the order of the day, to say nothing of the tales of infamously cheap construction.

As the reader may have guessed, yours truly has not personally tried any of these modern pseudo-sta-prests. Buying a pair of sta-prest from the triumvirate of mass mod retailers has always seemed pointless given their low reputation and the high cost of having them shipped to the states. Nor have I tried the more promising sta-prests from Jump the Gun in Brighton (though a pair are in the mail currently!).

But I digress. The point of this post is not to review modern trousers sold as sta-prest (though such a post will be forthcoming), but to suggest some available alternatives. The following trousers may not be sta-prest, but nevertheless they keep razor sharp creases are are sure to look boss with a freshly shined pair of boots or brogues.

The most expensive trouser on the list. At just under $100 these bad boys aren’t cheap, but they look great, despite the admittedly modern silhouette. “Tailored from stretch cotton fabric for ease of movement, this style is also non-iron for a crease-free look. 95% cotton, 5% elastane. $99.

The 100% cotton offerings from Lands’ End aren’t a bad buy at under $50, and the “light stone” color that comes ever-so-close to the neutral sta-prests of olde is an added bonus. The Land’s End no iron chino is also worth checking out. Though it has an exposed button it comes in a wider variety of colours than the dress pant. No iron dress pant: $48.96. No iron chino: $38.46.

The mighty Dickie’s. Reputedly a mainstay amongst American skinheads since the early ’80s, these beauties are easy on the eyes and wallet. Though heavier than traditional sta-prest, the 65% polyester/35% cotton blend guarantees razor-sharp creases. Available in a wide variety of colours and for only $22.99 a pair, they’re hard to resist. There’s a slimmer version available which may give a slightly better profile against your boots but comes at the cost of having a rise below the waist.